The boy called IFAD: A living testimony of how rural and agricultural development interventions can transform lives 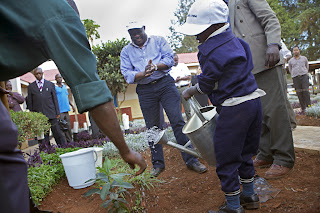 In designing and implementing rural development projects, our prime goal and objective is to improve the livelihoods of the people who we work with and serve. We report on project outcomes and achievements, we measure project success against the logical framework and we prepare completion reports showing the impact with hard facts and figures.

But there is nothing better, more powerful and moving than seeing with your own two eyes the impact of a rural development project on the lives of people.

Do you know of any international financial institutions or UN agencies that have someone named after them? I bet you there are not many. Well, IFAD does and we were lucky enough to meet Stephen Ifad Arisa Monari - the boy called IFAD!

Recently while conducting an evaluation activity in Kenya, IFAD’s office of evaluation came across Stephen Ifad. And Stephen Ifad’s story is quite extraordinary.

A highly determined implementing officer, Benjamin Angir, persuaded Monari to give the project a chance and sent him on a learning tour to Nakuru district in the neighbouring Rift Valley. There, Monari met other farmers and saw in person, how thanks to rural development and agriculture interventions the farmers had managed to improve their livelihoods, increase their income and were leading a better life.

Back home, Monari had second thoughts. He started to get involved in the project and encouraged his fellow villagers to join the project. Thanks to the community-driven component of the IFAD-funded project, Monari and the other farmers articulated their needs and priorities and took ownership of the project.

Already a tea and maize grower, thanks to the IFAD-funded project Monari started expanding his crops base to banana, sweet potato, pineapple and embraced goat rearing and beekeeping.

Twelve months into the project, Monari was reaping the benefits of the IFAD-funded Southern Nyanza Community Development Project. So, when on 25 July 2006, his wife Caren gave birth to a baby boy, Monari named the child Stephen Ifad Arisa Monari.

Taking advantage of the IFAD President’s visit to Kenya, Monari and young Stephen Ifad made a trip to Nyeri, to meet with IFAD President who was visiting the IFAD-funded Central Kenya Dry Area Smallholder and Community Services Development Project. 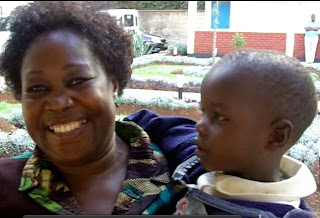 Monari shared his story with the President and started off by confessing that: “before the project, I was lazy and idle, I would just sit around doing absolutely nothing.”

“Thanks to the IFAD-funded project, I really started to appreciate and see the benefits of agriculture.”

“Today I use the income from my banana farm to buy maize to feed the family. The money from sweet potato sales goes to pay the school fees for the children,” explained Monari.

“I have diversified my activities. I am using the money I make from my beekeeping activity to pay for causal farm labourers. I am in the process of expanding my banana farm and have converted to tissue culture banana.” 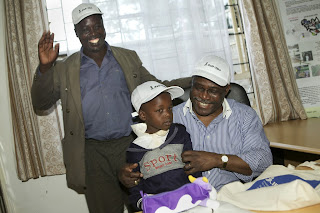 “I have a bank account. I have electricity at home and recently have bought a TV so now I know what is happening in the rest of world. I now have a comfortable life and I am never idle and have finally understood that time is money!” concluded Monari.

Once a skeptic, today Monari has a monthly income of KES 10,000 and aspires to earn KES 40,000 a month by next year. He has earned himself a new social status in his village and is a mentor for more than 50 farmers.

“The least I could do was pay tribute to the organization that had transformed my life for the better by naming by boy Ifad”, explained Monari shaking hands with IFAD President. 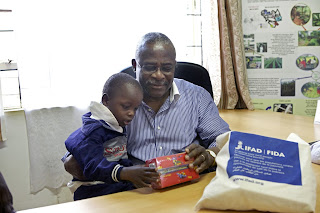 The entire IFAD delegation was honoured to meet Stephen Ifad and his father. Taking Stephen Ifad in his arms and wishing the Monari family well, Dr Nwanze said: “not many institutions have immortalized themselves in a human being.”

In Nwanze’s arms young Stephen Ifad examined his gifts, wearing his IFAD cap, together with the President they planted a commemorative tree.

The entire IFAD family wishes Stephen Ifad and his family all the best. We are sure that Monari and his family will move from success to success. And we are proud that it was an IFAD-funded project that changed the lives of this young family for the better!
agriculture cdd ifad kenya president