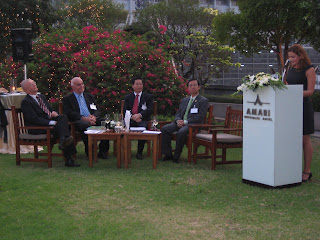 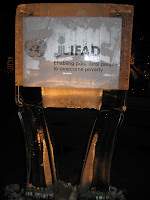 On the 8th floor of the Amari hotel in Bangkok, workshop participants gathered for food, drinks and opening remarks from Mr He Changchui (FAO Thailand), Mr Ennoo Suesuwan (BAAC), Mr John Skerritt (ACIAR)  and Mr. Thomas Elhaut (IFAD).
As pointed out by Mr Changchui, the temperatures were cooler today making the outdoor venue bearable for those wearing suits. It wasn't cool enough, however, to prevent the slow melting of the IFAD ice sculpture greeting participants at they arrived at the reception.
In his opening remarks, Mr Changchui highlighted Asia Pacific's achievements in becoming a dynamic and economic powerhouse while reducing the numbers living in poverty by 350 million people. The increasing gap between the rich and the poor as well as the global economic crisis calls for more concerted actions, as he stated, on the part of IFAD.
Not surprisingly, the economic crisis was highlighted again by Mr Suesuwan in his opening remarks to participants. According to Mr Suesuwan, Thailand's rural sector economy was impaired. His outlook, however, was promising - he expects a recovery in 2009 in part as a result of governmental subsidies.
Mr Skerrit described himself as an outsider to the group but he is hoping that will be the first and last time that he will have to describe himself that way. He shared 7 key messages with the group including:
Thomas Elhaut was gracious in his opening remarks. He touched on a number of key messages such as the need to do better at delivering, measuring and reporting, the integral role that knowledge management has to play and innovation along a learning path. While admitting that IFAD has failed at strengthening management capabilities he also shared some of the areas in which is it working hard to improve - direct supervision (which will get worse before it gets better), bringing IFAD closer to projects with the presence of country offices and embarking on joint missions. Thomas was loud and clear about one thing... we need to be critical - it means we care.
Thanks goes to Martina Spisiakova (IFAD) for the warm welcome as the session's moderator.