Talk Show on Potentials of Remittances for Micro Enterprise Development 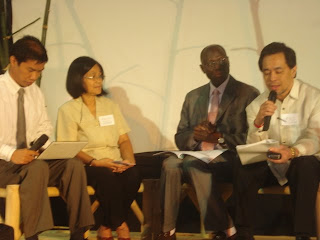 Remittances, the portion of migrant workers' earnings that are sent back home to their families, have been a critical means of financial support for families in the Philippines for a few decades now. For the most part, however, these inflows have been historically hidden from plain view and are not that easy to account for. But all that is changing as the scale of migration increases and the corresponding growth in remittances gains widespread attention.
This has been elaborated by the different speakers during the talk show on “Potentials of Remittances for Micro Enterprise Development” hosted by Ariel Ayala of the Catholic Media Network at the SM Megatrade Hall 3, Mandaluyong City, Metro Manila, Philippines, during the 3rd IFAD-Philippines Knowledge and Learning Market. It was attended by some 100 participants from various migrant groups, local government units, national government agencies, the media, and NGOs. 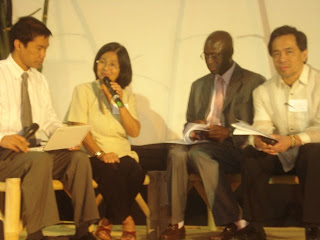 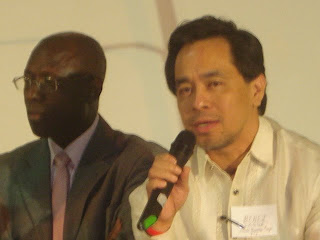 Experiences and inputs from Sana F.K. Jatta, CPM of IFAD:
The different speakers shared the same views and came up with the following suggestions and recommendations.

Ms. Villalba said that an NGO may suggest to IFAD, SBGFC, and other government agencies the promotion of social ventures supported by appropriate policies.

Mr. Lagua emphasized that remittances per se will not bring development; it is not the panacea or ultimate solution to our problems. Our migrant workers should be encouraged to invest in agriculture and the government should provide the necessary infrastructures and market opportunities as well.

Some feedback from the audience:

"The talk show was nice but the time was limited!" - Susan Perez, DAR-FAPsO.