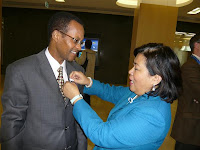 To mark the International Day to Eliminate Violence against Women on 25 November, IFAD’s Thematic Group on Gender, colleagues from the Communication Division and the United Nations Women’s Group (UNWG) joined hands to distribute white ribbons among male and female colleagues.

Jessie Mabutas, Assistant President and IFAD Focal Point for the UN Secretary-General’s Campaign “UNITE to end violence against women”, kicked off the event by handing out white
ribbons to male colleagues, from senior managers to interns. 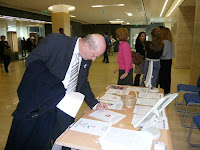 About 275 colleagues, mostly men, signed the signature poster of the White Ribbon Campaign and took the white ribbon as a symbol. They pledged not to commit, condone or remain silent about violence against women and to influence other men and boys not to accept violence or justify violence.

This event showed how many IFAD colleagues are interested in stopping violence against women. It proved sceptics wrong who think gender based violence is not on the agenda of IFAD. It also helped us to question our attitudes and how each one of us is influenced by stereotypes. We demonize men as perpetrators of violence or argue whether women can also be violent. Instead, it would be much more helpful to support men who have the courage to speak out against sexual harassment and violence against women, and to encourage women to reach out to men and start a dialogue.

The white ribbon helps to create positive change by influencing men not to use violence and by nourishing greater respect among women and men. It is a symbol for change in gender relations.