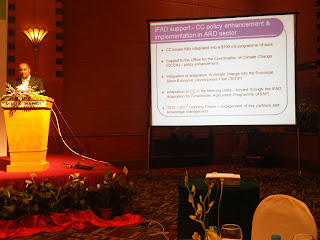 by Jeffrey A. Brez

This afternoon at the 6th Global Community-Based Adaptation conference in Hanoi, Vietnam’s Ministry of Agriculture and Rural Development (MARD) and IFAD shared their experience in making IFAD’s 2012-2017 strategic planning document for Vietnam climate smart. (these documents at IFAD are known as “Results Based Country Strategic Opportunities Programmes” or COSOPs). IFAD’s portfolio in Vietnam focuses on the poorest rural communities, including ethnic minorities and women headed households, and is now worth about US$257 million, with another USD100 million of investments anticipated over the 2012-2017 period.

Dr. Trieu (click above to view his 1-minute video statement) made the point that Vietnam is expected to be among the countries hardest hit by climate change, and that the agriculture sector is one of the most vulnerable. According to the National Climate Change Strategy, from 2001-2010 “damages caused by disasters like floods, storms, flash floods, landslides, inundations, droughts and saltwater intrusion have been significant: 9500 dead and missing people; and an asset loss of about 1.5% of GDP each year.” Given that the majority of Vietnam’s poor women and men live in rural areas and depend on agriculture for their livelihoods – and that agriculture is particularly vulnerable to natural disasters - supporting community-based adaptation is crucial to help buffer their livelihoods.

My colleague Roshan Cooke (in the photo above) explained IFAD’s ambitious approach. The “Climate Smart COSOP,” he said, will ensure that all of the investments that IFAD supports in Vietnam are climate-smart. This will be done through, among others, the following interventions: support to the policy making process to ensure that the climate vulnerability of poor rural communities is effectively addressed through MARD’s policy frameworks; integration of climate change adaptation responses into the provincial level Socio-Economic Development Plan (SEDP) for determining budget allocations; identification of adaptation pathways for diversification of livelihoods; and scaling up of autonomous adaptation actions that rural poor people are innovating.

Several presentations were made and the following discussion was lively. Issues raised included how to address the “surplus of rural population in farming,” how to balance focus between smallholder farming and opportunities in the rural non-farm economy (and beyond), and how to fill the knowledge gap on local level impacts of climate change in rural areas.

I have learned a tremendous amount here, through a field trip to Hoa Binh province to visit a COHED project (biogas, alternative off-farm livelihoods for women and community-based eco-tourism, disaster preparedness drills) THANK YOU TO THE COHED TEAM, and great conference sessions that included an amazing Red Cross-designed game to raise awareness about disaster risk reduction and planning THANK YOU PABLO SUAREZ and JULIE ARRIGHI, and a session to practice pitching climate change stories to journalists, led by IIED – THANK YOU MIKE SHANAHAN and DRAGONS including Pakistan's AFIA SALAM of www.speakforchange.org.

CBA6 has two more days left! Follow the LIVE WEB STREAM or enjoy the blogs and vlogs and other interactive materials - and learn and share along with the rest of us.

Find out more here about how IFAD is supporting smallholders and poor rural people in Vietnam.