Less Hunger, But Not Good Enough

In this column, FAO Director-General José Graziano da Silva, IFAD President Kanayo F. Nwanze and WFP Executive Director Ertharin Cousin write that progress has been made in the fight against hunger – but not enough. 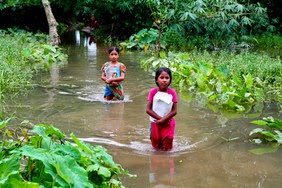 Every year, we take a snapshot of world progress in the fight against chronic hunger. This year, the picture is looking better, but it’s still not good enough.

Some 842 million people are estimated to have been suffering from chronic hunger in 2011-2013, according to The State of Food Insecurity in the World, a report released jointly by the Food and Agriculture Organisation of the United Nations (FAO), the International Fund for Agricultural Development (IFAD) and the World Food Programme (WFP).

This figure is down from 868 million during 2010-2012, and represents a decline of 17 percent since 1990-1992. Significant as this progress may be, it cannot disguise the harsh reality: roughly one person in eight suffers from hunger.

The vast majority of undernourished people, 827 million, live in developing countries, while 16 million live in developed countries. It is unacceptable that in a world of plenty, hundreds of millions of people are denied their most basic right to freedom from hunger. The only acceptable number is zero.

One of the hard truths underscored by the report is that, despite overall progress made in hunger reduction, marked differences persist across regions, with many countries left far behind. Sub-Saharan Africa has made modest progress in recent years, but remains the region with the highest prevalence of undernourishment (24.8 percent).

Western Asia has seen no discernible improvement, while Southern Asia and Northern Africa have registered slow progress. Eastern Asia, Southeastern Asia and Latin America, on the other hand, have seen greater relief from the grind of extreme hunger, with significant reductions in both the number and the proportion of hungry people.

Food security depends on a host of factors. While food availability is important, it is equitable economic growth and access to employment for the poor that enhance access to nutritious food. The report shows that transport, communication, safe water, sanitation, and appropriate healthcare and feeding practices are also crucial for reducing chronic hunger and undernutrition.

Given that 75 percent of the world’s poorest people live in rural areas and mainly depend on agriculture for their livelihoods, fostering inclusive growth means investing in agriculture. And this investment has been shown to pay dividends in poverty reduction.

However, such growth is not always sufficient to ensure that everyone has what they need to live healthy and productive lives. In many cases, despite a reduction in hunger, nutritional status may deteriorate, for example, with the increased prevalence of child stunting.

Inadequate intake of vitamins and other micro-nutrients, a high disease burden, unsafe water, poor sanitation and poor child feeding practices at key stages of child development cause serious health problems for up to two billion people globally. Greater efforts with a holistic approach are needed to combat malnutrition.

Thirteen years ago, world leaders set out a series of development targets to be met by 2015 through a global partnership, known as the Millennium Development Goals (MDGs). Under MDG 1, which aims to eradicate extreme poverty and hunger, the world sought to halve, between 1990 and 2015, the proportion of undernourished people.

With only two years remaining, 62 countries have already reached this target. Twenty-two of them have also achieved a higher goal, established during the 1996 World Food Summit in Rome, to halve the absolute number of hungry people in the same time period. But extending that achievement across the board will require urgent, sustained action.

Countries need to address hunger and poor nutrition by integrating food security and nutrition into public policies and making the necessary resources available.

We urge governments, organisations and community leaders in every region to make economic growth more inclusive through policies that target family farmers and foster rural employment; strengthen social protection; scale up nutrition-enhancing interventions to improve dietary diversity and the health of the environment, especially for women and youth; and promote the sustainable management of natural resources and food systems.

Only with sustained efforts and long-term commitment will we be able to reach well beyond the MDG targets to fully interrupt the cycle of extreme hunger, malnutrition and poverty that is stifling the potential of future generations.

Better is good, but when it comes to hunger, better is not good enough. There are 842 million reasons why.