Posted by Unknown on October 24, 2014
UN Agencies – IFAD, FAO and WFP, led by the UN Women and with the support of the African Union (AU), last week (October 15 – 17, 2014) co-hosted a Sharefair for Rural Women’s Technologies in Nairobi, Kenya, the first of its kind in Eastern and Southern Africa.    The objective of the Sharefair was to showcase agricultural innovations that enhance women’s access to labour-saving technologies, as the main players in ensuring family nutrition and household food security.  The event was organized to coincide with the International Day of Rural Women marked yearly on 15 October, with this year’s theme, Rural Women and Agriculture; and World Food Day, on 16 October on the theme of Gender, Food and Nutrition Security. 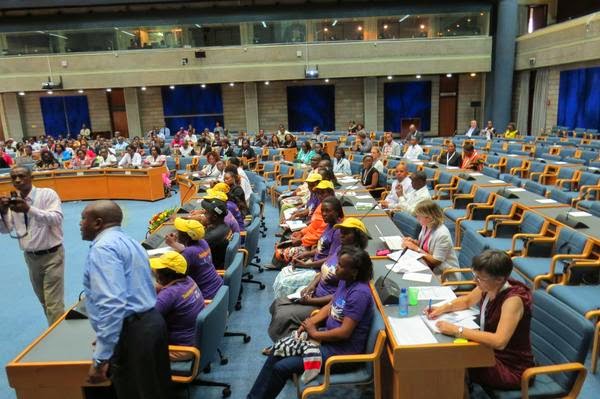 African can feed itself
Rhoda Peace Tumusiime, the AU Commissioner for Rural Economy and Agriculture, officially opened the Sharefair on the first day, urging Africans to harness the continents’ full agricultural potential in order to achieve food security. Christine Musisi, the Regional Director, UN Women, ESA stated, "When women lose, we all lose,” adding “women are the heart and soul of agriculture in the developing world.”  Other guests present at the opening ceremony were the UN Office in Nairobi Director General Sahle-Work Zewde, and Government of Kenya Principal Secretary, Ministry of Devolution and Planning, Eng. Peter Mangiti.

IFAD’s Senior Technical Adviser, Gender, Empowerment and Social Inclusion Claire Bishop-Sambrook delivered the key note address during the first Round Table Dialogue (RTD) on Women’s access to technologies: where are we and what are the opportunities for agricultural growth?  Some issues raised by Bishop and other panelists were: the need for involving community leaders and other decision makers as an enabling factor for enhancing women's access to labour-saving technologies; supporting women to share on the challenges facing them and provide solutions; involvement of the private sector in supporting technologies that enhance rural women’s productivity; and ensuring mechanization is done at all levels of the farm labour profile, and not just during land preparation.  A repeated call throughout the Sharefair was ‘The Hoe Must Go!”, a call to modernize agriculture with affordable, labour and time saving technologies that support women and that attract the youth to agriculture.

Women’s voices must be heard
Dr. Wanjiru Kamau-Rutenberg, Director African Women in Agriculture Research and Development (AWARD) presented the Key Note address during the second RTD on Looking to a food secure and prosperous Africa: what will it take? Dr. Wanjiru’s address focused on the role of women in decision making and getting their voices heard in matters nutrition, mechanization and access to finance.  “Women must take center stage in agriculture conversations…all of us need to build the pipeline of young women who sit at the decision-making table,” she urged.  The second speaker, FAO Country Representative in Kenya Luca Alinovi, emphasized the role of family farming and the importance of investing in youth as agents of change in agricultural development, and poverty alleviation in general.

Other panelists in this session were Julianne Friedrich (IFAD PTA - Nutrition), and Mubarak Mabuya and Jasper Mwesigwa of IGAD who highlighted IGAD’s efforts to address women’s vulnerabilities to shocks and support for community-based climate services to achieve food security and build resilience in the Horn of Africa.
Put farmers first in research
The last RTD dwelt on farmer-research linkages with an appeal to researchers to involve smallholder women farmers in research processes as the chief custodians of indigenous knowledge.
Besides, the policy-level round tables, the Sharefair also organized parallel technical sessions such as: Knowledge management and networking in the innovation cycles by IFAD’s Silvia Sperandini, Intellectual Property as an assest in the business and Innovative Practices: Women’s Voice from Community to Policy and Back, among others.
Recognizing youth potential in agriculture

Another component of the Sharefair was the Young Innovators Award which sought to recognize promising students who are designing technologies that take into consideration the unique gender dimensions of rural agriculture, food security and nutrition. The award targeted students from agricultural learning institutions, social science, and IT departments within universities and polytechnics in the Eastern and Southern Africa region. The categories that won awards were: -
In concluding the Sharefair, the main messages in moving forward the agenda for rural women technologies were: -