Striving for Gender Balance: How IFAD can achieve gender balance in its management?

Posted by S.Sperandini on July 21, 2015
By Andrea Luciani and Wanessa Marques Silva, Office of the President and Vice-President
A recent meeting of IFAD’s Thematic Group on Gender addressed a very pertinent issue for UN workers, especially women: how can IFAD achieve a gender-balanced management structure?


Chitra Deshpande, a member of the 2014 Global Staff Survey Project Charter Team on "Leadership and People Management", set the scene: "IFAD is doing a good job in gender mainstreaming overall and compared to other UN-agencies. However, we still have work to do".
IFAD has been striving to achieve the target of 35 per cent of women at the Professional level 5 (P-5) and above  – yet only once reached above 30 per cent in 2013. The figure has persisted at around 29-30 per cent, and in the last quarter of 2014 it fell to its lowest point: 26 per cent.

Across the UN system the goal is even more challenging: gender parity (50 per cent) at P-4 and above. The current data show that women account for 37 per cent of P-4 and above positions in IFAD.
Why is this so challenging in IFAD? Currently 99 of the over 500 IFAD staff members are in P-5 and above positions. Many are found in the Programme Management Department where over 60 staff members at P-5 and above, yet only 13 are women. This low number may partly be explained by the nature of the work of country programme managers, which requires regular travelling.
Why this continuing interest in meeting the target? The reason is simple: women in management make a difference. According to a study published in the 2012 Harvard Business Review, which interviewed over 16,000 male and female leaders, women are more effective than men in leadership positions (ranking 55 per cent versus 52 per cent of overall leadership effectiveness respectively). Furthermore, filling the gap with more women introduces different views and ways of management into an organization. The study also indicated that a higher presence of women at management level can establish a positive cycle of hiring more women and promoting women to higher positions. 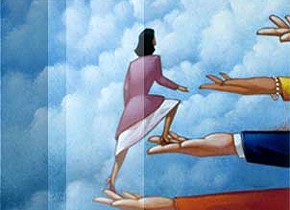 Recently, IFAD has introduced a number of initiatives to overcome this challenge, including: setting gender and diversity quotas in the latter stages of the recruitment process; providing training in gender-sensitive interviewing techniques; and mainstreaming gender and diversity into human resources policies. In addition a Gender Action Plan for the IFAD Workplace is being drafted. The initiatives have already shown results: 38 per cent of D-1 posts are now held by women.

The participants in the meeting, over 40 people from different departments of IFAD, proposed other initiatives to address three main issues: internal promotion, the selection of candidates, and the expansion of the pool of candidates in order to attract more qualified female applicants.


For internal promotion, the proposal to enhance the skills of women working in P-1 to P-4 positions was very much supported. A detailed proposal for the creation of an IFAD mentoring programme was discussed, as well as the importance of providing internal candidates with feedback from the recruitment process. Another proposal was for IFAD to host the CGIAR Women’s Leadership programme in Rome.
For the selection process, the increasing use of anonymous written tests for pre-screening candidates was supported. Another suggestion was to remove the age, name and sex from Personal History Forms when preparing a shortlist of candidates.
To expand the pool of female candidates, proposals included using search firms to identify qualified women, improving women’s work-life balance by promoting flexible working arrangements, and expanding the pool of development specialists through hiring senior female consultants.
Adolfo Brizzi, Director of IFAD’s Policy and Technical Advisory Division, reminded participants that generally for P-5 and above positions, women candidates make up less than 30 per cent of the applicants and this tends to be reflected throughout the entire selection process.
It was clear to the participants that achieving a gender-balanced management structure needs to be an IFAD priority and is essential to make significant strides in gender mainstreaming. The outcomes of the meeting provided a solid basis upon which to overcome the current gap in P-5 and above positions. Given the commitment and enthusiasm demonstrated at the meeting, we are already far ahead!
career development gender gender-balanced global staff survey human resources management structure