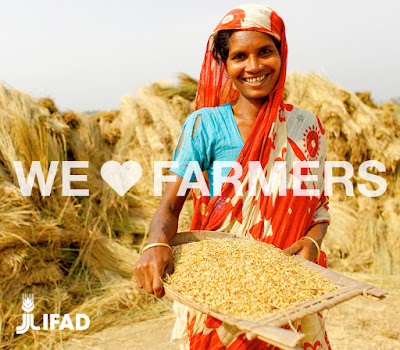 As different cultures celebrate Valentine's Day, IFAD reminds the world of the importance of investing in small farmers.

At IFAD, we love investing in small farmers. Some of our reasons may be obvious – small family farms feed up to 80 per cent of the population in Asia and sub-Saharan Africa, manage a large share of the natural resources and ecosystems, and support the livelihoods of more than 2 billion people.

Other reasons might be surprising – for instance, did you know behind each box of chocolate is the important work done by a small farmer?

There are so many reasons we believe the world should also love and support small farmers, but here are our top five reasons.

In the Near East and North Africa region, seventeen million young people – more than 20 per cent of the population – are without work. Since young people face the highest rates of poverty, they often move away from home to seek opportunity elsewhere. However, when young people work in agriculture, they not only can support themselves, but are more likely to adopt new technologies. This creates better yields, which in turn allows farmers to continue feeding the world's growing population. Rural youth are an important factor in eradicating food insecurity internationally.

IFAD supports the ambition young people have to not only find employment, but to act as entrepreneurs within the industry. The IFAD Rural Youth Economic Empowerment Programme (RYEEP) combines IFAD's knowledge of rural development with the expertise of two entrepreneurship-focused social enterprises to create employment opportunities for more than 18,000 rural youth between the ages 15 and 35.

In pursuing its target to reduce 80 million tons of C02e by 2020, IFAD is supporting small farmers with adaptation projects that could reduce emission by 30 million tons. These initiatives includes planting trees and creating natural barriers against flooding and unpredictable rains, using crops that are adapted to resist climate change, and other solutions to address short-and-long-term problems.

3. Small farmers produce much of the world's cocoa (and chocolate)

The world spends US$83 billion each year on chocolate. Europeans especially love chocolate, eating one kilogram of it every month. This industry depends on the five million small-scale family farmers who grow 90 per cent of the world's cocoa. IFAD is helping cocoa farmers in 12 countries to overcome problems such as pests, disease and unsustainable production methods that harm the harvest and local environment. In São Tomé, IFAD has formed a relationship with the local farmers to connect their high-quality cocoa with Fair Trade buyers such as Kaoka. These efforts have helped nearly 2,000 farming families in São Tomé to revitalize their cocoa industry and produce 1,200 tons of cocoa in 2014.

The population of the planet is expected to grow to almost 9.5 billion people by 2050. Food production will need to nearly double in developing countries to feed this population and address existing hunger and malnutrition. Since most of the world’s farms are small, investing in them will be the only way to address this growing demand.

In Cuba, an IFAD-funded project has organized 157 farming cooperatives to increase the production and productivity of crops such as maize and beans. The Cooperative Rural Development Project in the Oriental Region (PRODECOR) supports the country — which imports 80 per cent of its basic food requirements — to address food insecurity. The population has been impeded by intense drought due to climate change and limited agricultural machinery. With the use of new technologies and the pooling of knowledge, these cooperatives are expected to benefit over 52,000 people.

Biodiversity is an essential part of preserving the planet. Changes to an environment such as the loss of a plant or species has the potential to derail the balance of the whole region. When family farmers take the necessary steps to secure their local environment, they not only ensure that their crops yield bountiful harvests, but that there will be future harvests too.

With the support of IFAD, small farmers in Brazil have implemented new agricultural practices that are more environmentally friendly. Over the course of nine years, the region saw a 69 per cent reduction in land erosion, and carbon sequestration ranging from 15 to 79 per cent. In the 20,000 hectares of saved and preserved land, there has been an increase in diverse species of 11 per cent.