Posted by Beate Stalsett on August 12, 2016
In honour of International Youth Day, held annually on 12 August, IFAD is featuring seven rural youth from around the world to discuss the challenges and opportunities they face, and to discover what they need in order to improve their lives and feed the world. 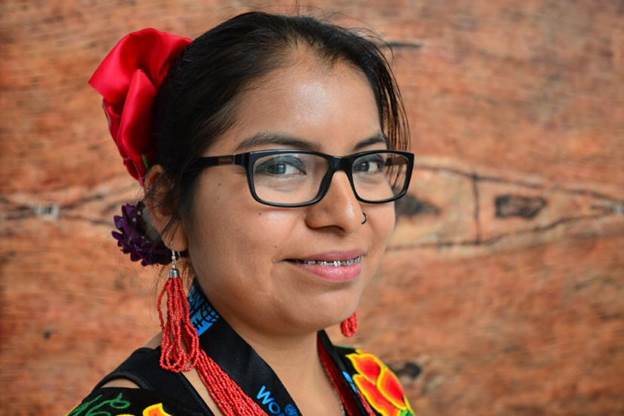 In this interview, Paulina Schwaner, an IFAD consultant and former journalist from Chile, spoke with Dali Ángel Pérez, 28, a young indigenous leader from the Zapoteca, the indigenous people of Mexico.

When Pérez was a child, her family fell victim to the ongoing agrarian conflict and were forced to flee their homes to take refuge elsewhere. Years passed before they were able to return to their home. Pérez became committed to defending her land which belonged to her forefathers and was soon bestowed upon her.

Driven by the idea that young people have a responsibility towards defending the land, she set out to empower and educate indigenous peoples of her community through an IFAD-supported organization, CIARENA.

Today she is the co-chair of the Indigenous Youth Caucus that is represented at the United Nations Permanent Forum on Indigenous Issues.

Below is their conversation -


Q: Dalí, at 24-years-old you were awarded the National Youth Award in Mexico 2012 in the Human Rights category. What did it mean for you to receive this award?

“The prize is a recognition given by the Mexican government to youth in general. This was not a prize aimed at ‘indigenous’ youth as such and I was nominated by different organizations in which I have been involved. It is not an individual award, rather I like to consider it a recognition of all the work we along with other young people at a community level are doing.

Certainly, the award has been an incentive for further progress, but not everybody sees it as a final goal but rather a resource that gave us an opportunity to promote the participation of young people, even though, there is still much to be done, especially with public policy issues addressed to indigenous youth.”

Q: Currently you are working with an Indigenous women’s organization called CIARENA. What is your role there?

“My role in CIARENA is coordinating the youth and childhood committee that looks into representing and building on youth aspirations through workshops.

After a series of training, these young people form their own collectives (groups) and define what activities that young people can organize in groups and replicate in communities and disseminate information.”

Q: In your line of work, what challenges have you faced?

“Our main challenge is highlighting the regional and community level issues youth face in an international arena. One fundamental challenge has been attempting to have more youth representation in these spaces.

We seek to encourage other young people from communities to participate, but it is not always easy because sometimes there is a lack of appreciation for youth participation. In fact, sometimes we hear people say: “What are young people doing here when they don’t know the history?”

Some elders see youth as being inexperienced and this discourages young people from getting involved. Although, we have found great leaders who have supported us, such as Dr. Myrna Cunningham, who has always encouraged us to continue to participate and acquire the tools to be informed and have clear messages that we want to communicate because if we don’t have that, we will not achieve anything.”

Q: What do you think is the greatest potential of young people?

Q:What do you think could make rural life more attractive for young people?

“In our communities, there are a lot of youth migrating and they go to the cities or they go to the United States for a number of reasons and factors. To begin with, there is a lack of support towards rural development and for young people to achieve their own initiatives.

With the lack of support, these situations lead to depression amongst young people. In the area where we work, there are many agrarian and land conflicts and the young generations are finding it difficult to access land in order to cultivate crops.

Since they cannot see a way to survive in their communities they decide to migrate to seek opportunities. There is also a big problem on the issue of identity; many young people don’t want to accept their identity, either they don’t want to feel indigenous or they deny it.”

Q: How do you envision the future for indigenous youth people in Latin America?

If we continue to work in coordination with other indigenous movements, indigenous women – not individually but collectively – we will definitely move forward. And this remains, in the years to come, we will see a change in public policies within the institutions that have to do with youth, where there will be a real participation of indigenous youth that would narrow the gaps.”

“I want to keep working with indigenous peoples and indigenous women. We have to keep sowing the seeds for the new generations and I want to take this process forward adding more people to the growing movement. I see myself accompanying this movement from where I am based.”