Posted by S.Sperandini on September 27, 2016
By Clare Bishop-Sambrook, Lead Technical Adviser (Gender and Social Inclusion)
At IFAD’s 118th Executive Board, all three country groups presented a joint statement in support of the midterm review of IFAD’s policy on gender equality and women’s empowerment. This joint statement represented the position of IFAD members from 176 member states.
As noted by Adolfo Brizzi, Director of the Policy and Technical Advisory (PTA) division, this joint support is both significant and greatly appreciated. It represents consensus among different countries - with varying socio-cultural contexts - about the importance of women’s empowerment and gender equality for contributing to the successful outcome of IFAD-supported investments.

Links between targeting and gender
This support for gender mainstreaming complemented an earlier discussion at the Board meeting that emphasized the role of targeting in ensuring outreach to poorer members of rural communities. This focus on the ‘who’ of project participants lies at the heart of what makes IFAD unique, both as a UN agency and as an international financial institution. Contextual analysis – in terms of understanding the livelihoods, needs and priorities of poor rural women and men in different age groups – underpins project design and should be undertaken early in the design process.
Progress recorded in midterm review
The mid-term review of the gender policy, which was approved in 2012, provided an opportunity for a period of reflection. While the annual report on gender (which is presented as an annex to the annual report on IFAD’s development effectiveness - see Annex IV in RIDE) provides a snapshot of activities, the midterm review was a more thorough investigation of achievements and outstanding challenges associated with the implementation of the policy.
The review noted that IFAD is generally making very good progress - not only with implementing the gender policy but also with the 15 indicators in the United Nations System-wide Action Plan on Gender Equality and the Empowerment of Women (UN-SWAP). Women now account for half of all participants of project activities. IFAD’s gender team is now pushing for more gender transformative impacts by using approaches – such as household methodologies - that address some of the underlying causes of gender inequality. IFAD has been commended by UN Women as a leader among United Nations entities for its progress in meeting the UN-SWAP indicators: by the end of 2015 we had met or exceeded 11 of the 15 indicators.

Way forward in IFAD10
Nevertheless, the midterm review noted that IFAD will need to step up its efforts in order to meet the demands of the new strategic framework, as well maintain current achievements. Priorities include:
Next steps
The midterm review also set out the five-point pathway for gender mainstreaming that IFAD will follow during IFAD10. This is now available in a four-page document with the centre pages summarising key actions in relation to the five action areas of the policy. As noted in the EB statement, the next step for the gender desk is to prepare an implementation plan and responsibility matrix to identify the key milestones and actors to ensure timely implementation.

Acknowledgements
The PTA gender desk and the regional gender coordinators appreciate the support of senior management, and in particular the President, for creating the space and providing support for the implementation of the policy. We also recognise the value of the supplementary funds and other forms of financial support received during this period (from Canada, Finland, Japan, Netherlands, Norway and Sweden) which have played a vital role in supporting outreach activities and piloting innovative approaches such as the household methodologies. And lastly, we would like to thank our colleagues – especially the gender focal points, country programme teams and thematic experts in PTA and other parts of the house – all of whom play a key role in mainstreaming gender both in operations and in IFAD as an organization. 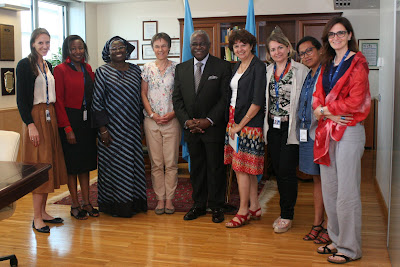