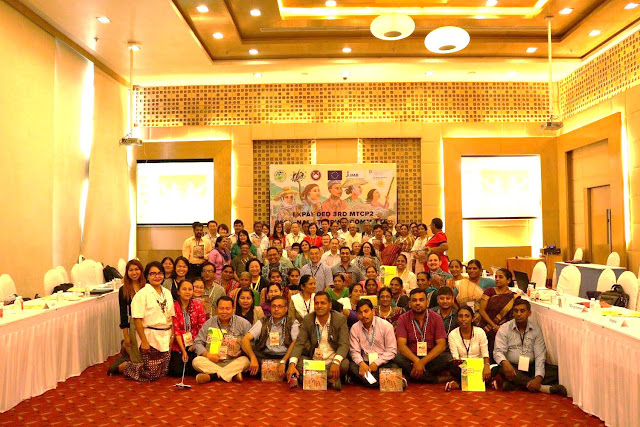 The RSC opened with  welcome remarks from SEWA Executive Director Reema Nanavaty, La Via Campesina (LVC) Program Manager Zainal Arifin Fuad, Asian Farmers’ Association for Sustainable Rural Development (AFA) Secretary General Esther Penunia and International Fund for Agricultural Development (IFAD) Country Program Manager Benoit Thierry.
The opening remarks were followed by talks from resource persons who shared their valuable inputs on sustainable agriculture. Sanjaybhai Prasad, Principal Secretary of the Department of Agriculture and Cooperatives of the Gujarat Government discussed government schemes which lay thrust on profit going back to the actual producers or the farmers. Dr. Rajendra Khimani of Gujarat Vidyapith presented a case study on the changes and benefits experienced by a village in Gujarat after the implementation of climate-resilient farming. Meanwhile, Zainal Fuad discussed in detail about the protection and recognition of the rights of peasants and people working in rural areas. Yacinta Esti, Project Manager of the ASEAN Farmers’ Organisation Support Programme (AFOSP) of the ASEAN Foundation presented about the AFOSP and its activities which includes the ASEAN-EU roundtable discussion on strengthening agricultural cooperatives and the ASEAN Learning Series and Policy Engagement on Agricultural Cooperatives for coffee which was participated by MTPC2 NIAs. 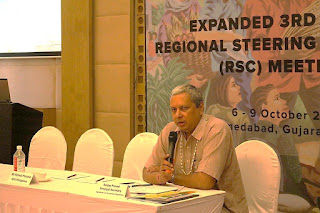 Sanjaybhai Prasad, Principal Secretary of the Department of Agriculture and Cooperatives, Gujarat Government
MTCP2 Accomplishments
Updates on MTCP2 projects implemented in each sub-region were also presented. Zainal Fuad presented the key accomplishments of Southeast Asia + China sub-region from June 2015 to June 2017 which includes the expansion of memberships in 7 countries (Cambodia, Indonesia, Laos, Myanmar, Philippines, Vietnam and China) and the expansion to one more country, Thailand, in 2017. Currently, there are 31 national farmers’ organizations (FOs) and 11,059,249 individual members in the sub-region. Among the major activities conducted by MTCP2 SEA + China are profiling of FO member organizations, organization developments and legal registration, farmers' forum, dialogue/networking with other sectors, land law policy, production and trainings on marketing and seed banking, indigenous vegetable refrigeration and liquid fertilizer, transformation of farmers into agricultural cooperative, partnership with IFAD, active engagement in GAFSP program and linkage with Grow-Asia. A lot of activities such as forum and summer camps were also conducted to improve the participation of youth and women sectors in MTCP2. Currently, women and youth are already involved in FO structures.
Dr. Keshab Khadka presented the accomplishments of MTCP2 in South Asia which include the increase in membership from 41 to 58 national FOs and in individual membership from 61,31,288 to 91,26,837, and improved market linkage for farmers through ICT (i.e. Rudi in India), value chain, etc. Dr. Khadka also presented the key targets of MTCP2 South Asia for 2018 including climate change and sustainable agriculture, organizational strengthening of FOs through ICT, and coordination with FAO, SAARC and other regional/international agencies. 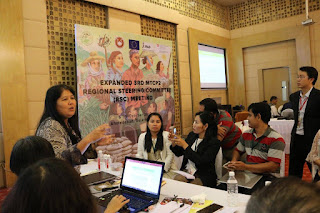 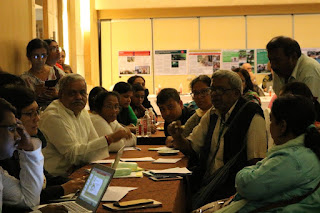 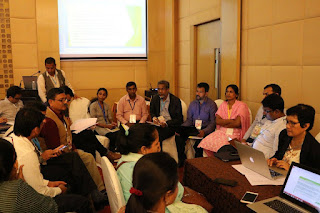 Breakout sessions
The next two days of the RSC focused on discussing successes, challenges and recommendations, deadlines for various funding/s and reports, brainstorming about the focus for the next phase and developing new ideas for fund raising from an external funding for the forthcoming 5 years. 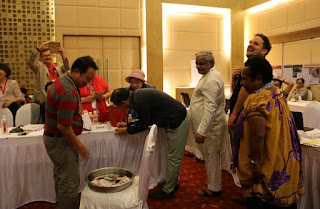 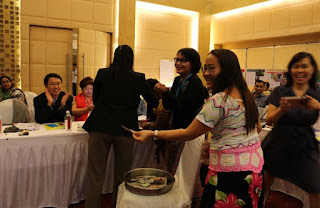 Peter Situ, international expert, initiated a crowdfunding for a support/trust fund for Asia-Pacific farmers. Other participants of followed and donated generous amounts to start the trust fund. 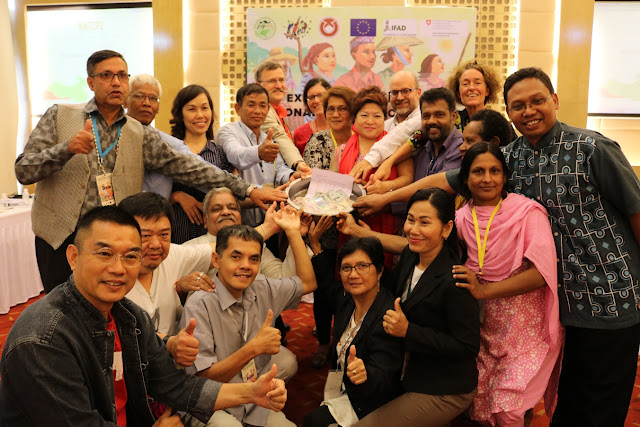 Recommendations for better implementation of MTCP
The Supervision Mission team composed of Peter Situ, Ed Angeles, and Yolando Arban who visited some of the countries implementing MTCP2 programmes also reported their key findings and presented their recommendations during the de-briefing session.
Yolando Arban who visited South Asia remarked that in SA, there is a strong partnership with government organizations at the district and village levels. He also acknowledged the benefits of producing manuals/publications, monthly newsletters, websites that capture and share good practices of FOs. He recommended that SA be persistent in continually coordinating with IFAD country offices and offer concrete proposals how to help their programmes and to tap or mobilized local development communication practitioners.
Meanwhile, Ed Angeles’ main findings from his visits include: positive outcomes observed in farmer-to-farmer and country-to-country exchanges, increased youth participation in almost all the countries, and potentials in China, Indonesia, and India yet to be further developed to reflect the country size and huge number of smallholder farmers and of their FOs. He also noted the increased number of KM materials generated from the projects implemented.
On the next phase of MTCP, the following points have been recommended by the SIS mission team: change the program name to Asia Pacific Farmers Programme as agreed in RSC 2014 in Hanoi, more inclusive and representative national platforms, FO development sustainability and financing instrument (trust fund), and build on farmer businesses, technical centers, promotion of value chains and FOs led enterprises.

Knowledge Management Fair
Among the highlights of the RSC is the KM Fair where success stories of farmers and farmer organizations from the 3 sub-regions covered by MTCP2 Programme were presented and put up for popular voting by the participants and the partners from IFAD. Previously, a KM Fair was held by each sub-region and three winners for each sub-region were picked to move up to the regional KM Fair. (Click this link to view the complete list of entries.) 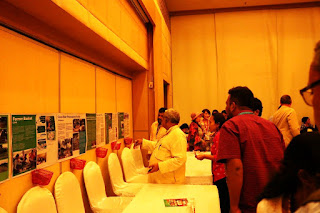 Participants putting money under their favorite entries
After the voting, MTCP2 Philippines’ entry, “Improving Lives through Partnerships -
the Fabrica Experience” which is about the establishment of a coco-fiber processing facility in a town in Camarines Norte, Philippines and how it helped the coco-farmers in the area won the grand prize. MTCP2 Pacific’s entry, “PNG Solar Rice Mill Project” bagged the 2nd most votes, and MTCP2 Nepal’s entry on advocacy, “MTCP2 Nepal’s suggestions incorporated on the draft Right to Food Bill” won 3rd place.
The grand winner will receive US $1,000 which they will use to fund a learning visit to another country under the MTCP2 Programme.

Visiting local farmers & coop
The RSC participants went to Anand district to interact with small and marginal farmers and to see their initiatives to improve their livelihood situations. 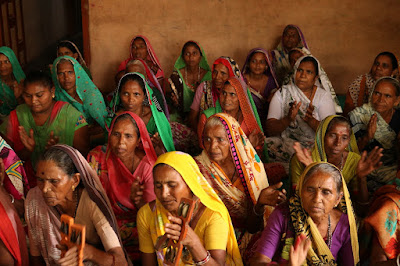 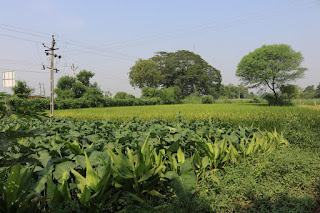 Farmers in the community farm various crops including rice and taro 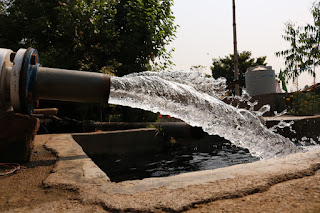 The RSC delegates also stopped by the Amul butter and infant milk factory and were taken around the factory to see their facilities and production processes while being fed with the history of Amul.
Amul or Anand Milk Union is a dairy cooperative based in Anand, Gujarat. Amul was formed as a response to the exploitation of marginal milk producers. In 1946, milk farmers went on a strike which led to the setting up of the cooperative to collect and process milk. Milk collection was decentralized as most producers were marginal farmers who could deliver, at most, 1-2 litres of milk per day. Anyone can sell milk to Amul, regardless of their class, caste, or religion, or the amount of milk they have. 70% of Amul's profits go to the members, the milk farmers. 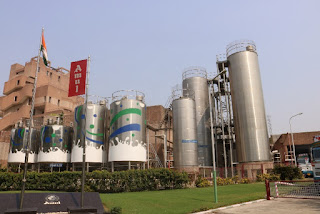 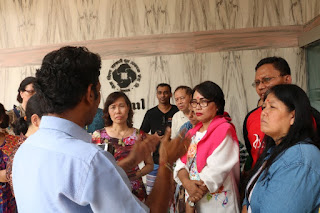 At Amul factory
The participants also had a special Session on Anubandh, where SEWA-Founder Ela Bhatt spoke on building holistic and mutually beneficial communities to cater to the basic needs of daily life: food and water, clothing, education, health, housing, education and banking. 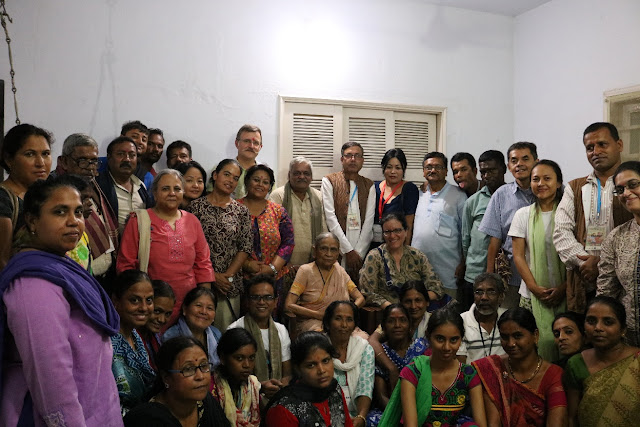 Experiencing local culture
Aside from the regular activities usually conducted for RSC, the delegates were exposed and immersed to the local culture and interacted with experts through the meetings and gatherings organized by SEWA. This include the welcome dinner at the SEWA Ganeshpura Center, the solidarity night held at the Manipur Center, a visit at SEWA Gram Haat Office where a dinner cooked by women entrepreneurs was hosted for the delegates and Dr. M H Mehta-ICFA gave a short talk on the Eco Agri Revolution Model for Asian Farmers.

The RSC aims to deepen the understanding and appreciation of the major accomplishments of the MTCP2 program as well as key learnings and lessons. It also aims to identify joint actions, common training needs, and research agenda in support of key policy agenda at various levels. The meeting will also be a venue for donors and other development partners and FOs to have a dialogue and share experiences to enhance their solidarity.
The Medium Term Cooperation Program Phase 2 (MTCP2), a five-year program supported by International Fund for Agricultural Development (IFAD), Swiss Agency for Development and Cooperation (SDC)and European Union (EU), has been implemented in 18 countries across 3 sub-regions—Southeast Asia, South Asia, Pacific—engaging 1,544 sub-national farmer organizations with total membership of around 18 million women and men farmers. The program resulted to significant output amidst various challenges as well as great opportunities.
The RSC is organized by the consortium Asian Farmers’ Association for Sustainable Rural Development (AFA) and La Via Campesina (LVC), with support from key donor partners IFAD, SDC, EU and in cooperation with other partners for development ASEAN Foundation, Agricord, FAO, etc. This year's RSC was hosted by Self Employed Women's Association (SEWA), the National Implementing agency (NIA) for MTCP2 in India.