Sharing in the labour and the benefits: Agricultural Value Chain Development Project in the Mountain Zones of Al-Haouz Province, Morocco 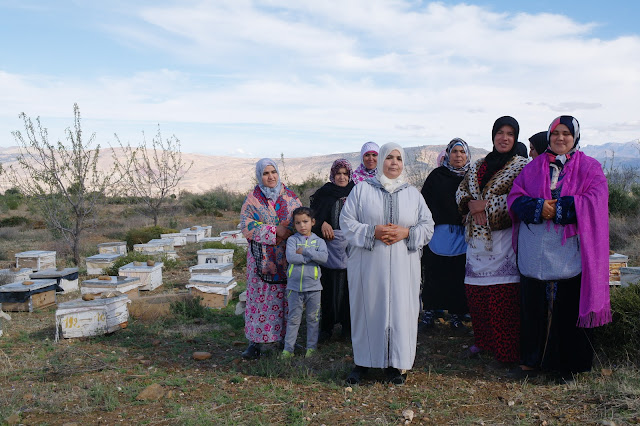 Women in remote mountain villages in Morocco are making and managing their own money and gaining skills and independence through this IFAD-supported value chain project. The project started work in 2012, building on a previous project implemented between 2000 and 2011. Of the nearly 28,000 taking part, about 11,000 are women.

The project has strengthened value chains for the primary products of the area – olives, apples, sheep and wool – enabling small farmers to increase the quantity and quality of their production and to connect with markets. Twelve cooperatives have been set up, allowing members to bulk their produce, and in this way increase their bargaining power and receive agricultural services. Six of these cooperatives are made up exclusively of women.

The project focuses on mobilizing and training women to encourage them to participate all along the value chains, and not just at the production stage, where less money is made. “We worked with the women on strengthening their administrative and technical capacities through the partnerships that the project has forged, mainly with institutional partners, but also with partners from civil society,” says Bensassi Zaineb, Agrifood Specialist and Gender Focal Point, Provincial Department of Agriculture. “The teams that were set up are now reaping the fruits of their work, through the services they provide to agriculture and through farmer-to-farmer technology transfer, with farmers paying fees for outreach,” they explain. “Production has increased for all three value chains selected by the project: 38 per cent for olives, 28 per cent for apples and 20 per cent for sheep meat.”

One of the realities of daily life in the mountain zones is that the women of the household always take care of feeding the livestock without benefiting from any profits on the livestock.

Thus, the “two-sheep initiative” was created. Many of the women started by taking out a small loan through the project to buy two sheep. They then organized themselves together to build up their businesses, selling animals for the Eid Al-Adha religious festival and using the wool to make Berber carpets sold as far away as Marrakesh. Results documented by the project show that the “two-sheep initiative” has increased the incomes of participating households by as much as 60 per cent.

“As the project went on, women wanted to diversify their income sources, so there was a beekeeping project and then an olive project, says Elmendili Abdellah, Provincial Director of Agriculture, Marrakesh. “Now we are into the environmental conservation system, so that all of the olive by-products that were being thrown away and that posed a threat to the environment are now being recycled to make soap and soft soap.”

The project has also made an impact on a sphere that is less easy to measure. Women’s activities outside the household and their membership in producers’ associations and cooperatives have enabled them to build networks outside their districts of origin, increasing their independence and freedom of movement. “Women have become more involved in community institutions as elected representatives,” says Zaineb. “They are now present at the regional chamber of agriculture. All of this means that these women have now become part of the territory’s socio-economic fabric and are actively participating in the economic progress of their communities.”

This is no small feat in a strongly patriarchal society. Says Abdellah, “One of the first things we did was to involve men and sensitize them around the need to have women involved in all tasks, beyond purely household tasks. In doing so, the men agreed to give up ground.”

IFAD Gender Awards winner 2017
The Gender Awards spotlights a programme or project in each of IFAD’s five regions that has taken an innovative, transformative approach to addressing gender inequalities and empowering women. This year’s awards celebrate operations in Bangladesh, Colombia, Mauritania, Morocco and Mozambique.
#gender