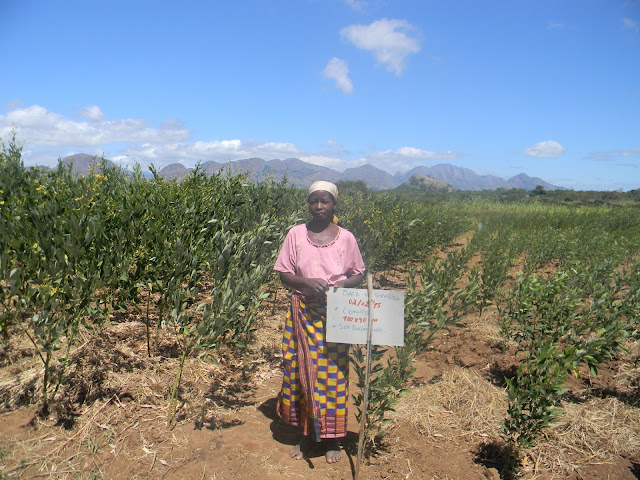 Women are increasingly getting their fair share of opportunities and advantages by participating in the Rural Markets Promotion Programme in the northern region of Mozambique, where two-thirds of the rural population is poor. Although this part of the country has good agricultural potential, farms there have some of the lowest yields in southern Africa. “The environment is conducive to high production and productivity, and to a diversity of crops,” says Robson Mutandi, IFAD Country Director. So how can the small-scale farmers in the region unlock this potential to rise out of subsistence farming? The answer is two-fold: producing surpluses, and marketing the surpluses. In other words, thinking of farming as a business and not just as a means for surviving day to day.

“The programme was designed to promote the access of small-scale farmers to the market,” explains Carla Honwana, Programme Coordinator. “So some of the activities we are doing are building the capacities of farmer organizations, rehabilitating access roads, and improving access to market information and financial services. And fortunately women’s empowerment has featured strongly since the programme was designed.”

In order to empower smallholders and enable them to connect to markets, the programme supports 500 farmer organizations, with women making up more than 50 per cent of the membership.  Much of the support takes the form of capacity-building and awareness-raising for these farmer organizations. “The really big thing I learned was to think like a businessperson,” says Isaltina Ali Trigo, a farmer. After taking training in literacy and numeracy, Ms Isaltina was able to use her new skills to calculate her food production, cut deals with buyers and seed suppliers, and to see her income grow. “Now I teach literacy to other people in my organization,” she adds.

The training has also translated into women increasingly taking on leadership roles. In 2012, fewer than half of the organizations had women in leadership positions, and many of the positions were secretary or treasurer, traditional roles for women. By 2016, 75 per cent of the organizations had women leaders, with some holding the role of president.

Ms Isaltina is not alone. Many women are now able to conduct business, and read and sign contracts, without fear of being cheated by traders or their husbands. And when the women sign marketing contracts, they get benefits that include guaranteed markets, better prices and inputs on credit. In 2012, only 4 per cent of contracts were signed by women, but by 2017 this had risen to 25 per cent and average earnings per contract had increased from US$56 to US$190.

As with many development initiatives, one of the challenges for the programme is to ensure that women’s high participation in most of the activities translates into lasting empowerment. This is often hindered by cultural traditions having to do with decision-making, power relations, women’s mobility, gender division of labour, and access to and control over assets and benefits. To address this, the programme is using the Gender Action Learning System (GALS) to empower participants to challenge entrenched gender stereotypes and renegotiate domestic chores within their own households. GALS is one the most comprehensive of the Household Methodologies that IFAD has championed to enhance gender equality and women’s empowerment, and there is a pool of trainers on this methodology in the region who are being called upon to ensure that the women can be agents of change in their community as well as within the confines of their home.

As Ms Honwana says, “Now we not only have participation of women, but we also have women being able, side by side with men, to take decisions about what to produce, what to sell, to whom, and especially what to do with the money. It's a sort of negotiation process at family level where they discuss and decide. Both women and men decide what to do.”

IFAD Gender Awards winner 2017
The Gender Awards spotlights a programme or project in each of IFAD’s five regions that has taken an innovative, transformative approach to addressing gender inequalities and empowering women. This year’s awards celebrate operations in Bangladesh, Colombia, Mauritania, Morocco and Mozambique.