Amplifying the voices of rural women in journalism 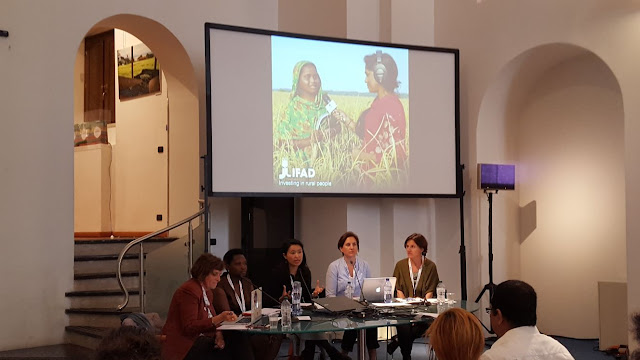 Last year brought a critical mass of women who refuse to remain silent. The “women’s movement” has been swept into the mainstream and become more diverse. Social media has become increasingly effective at mobilizing younger generations of women and girls. But what about the voices of women living in remote rural areas of developing countries?

Moving beyond victimhood
A theme throughout the discussion was the responsibility journalists have to find alternative ways to depict rural women. Thin Lei Win stressed how important it is to not fall into the narrative of portraying them as helpless victims of circumstance.

"Rural women are marginalized, but they are also extremely resilient”. Women have so much more to share than their suffering, and, most often, it is their joys and their new competencies that they want to talk about.

It is key that journalists rethink their perceptions of rural women and how they feature them. In other words, journalists must acknowledge their own bias and question whether it amplifies or suppresses the women's voices. Williams suggests that journalists use this inevitable subjectivity to their advantage by personalizing the stories in order to emphasize the dignity of rural women. She emphasizes how important it is to include “colour,” or small details that give humanity and personality to the stories of rural women. Even the most simple details can defy the stereotype.

Megan Williams does this in her interviews by "shifting my script to give the women the power to take hold of the narrative and being open enough to let them direct their own story."

On the development side, IFAD's Ilaria Firmian talks about how, when designing their projects, IFAD sticks to an approach that involves always starting with the voices of women. From planning to implementing to evaluating, the project is always tailored toward what the women thinks needs to be done. Therefore, it is important to give them the tools and resources necessary to speak up about what they want and need.

Caroline Namara's project, Radio Bushyeni, is a perfect example of this approach. It gives the power directly to women by giving them the training and tools they need to share their knowledge and strengthen one another's voices through radio communication and technology.

Getting men involved
A necessary component of all development projects is a gender transformative approach. This requires installing technologies and practices that change the culture of a community in a lasting manner. For a gender-based project to be effective, men must not be excluded from activities intended to empower women.

Win explains that when we incorporate men into the project design, "they are made to understand that this is not a zero sum game. When women gain, men gain too." Firmian agrees, saying, "there is no such thing as men’s resistance... it is just a lack of awareness.” She argues that men need only be incorporated in and educated by the projects in order to foster and gain their support.

Namara talks about how to create what she calls "male champions’’. Her project, Radio Bushyeni, invited men to attend a training on the empowerment of women before training the women themselves to work with radio technology. She tells us that her goal was to encourage the men to support their wives and to share what they had learned with other men.

Win, speaking directly to journalists, asked them to not see women’s stories as the domain of women journalists. Energy must be channeled toward encouraging journalists of all genders to pursue women's stories. Although empowering women is the priority, male journalists that elevate the stories of rural women must be supported as well.

In a world where women are speaking up more and more, it is imperative that actors from all spheres of life work together to ensure no woman is left without the ability to attain her own empowerment.