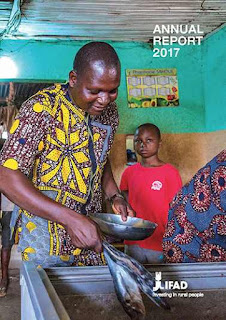 IFAD’s Annual Report and Highlights for 2017 are out now. The report presents facts, figures, analysis and stories on the year’s results and impact around the globe, thanks to contributions from people from across the organization. This cheat sheet gives you the big numbers from the main report, plus some tasters from the stories.

We’ve cut the AR carbon footprint this year, with 4-page Highlights and a 24-page short report that both come out in print, and the full report available on USB memory card and online. (You can also use the USB to store your own documents.) In addition to further shortening the print products (they were 12 and 64 pages respectively in 2016), we’ve given the content a radical overhaul and are using more reader-friendly infographics to present data and results.

Here’s a snapshot of the ongoing portfolio and new approvals during the year. All the numbers are correct as at 31 December 2017.
The AR map in the front cover of the main report shows country offices, current and planned hubs, and regional SSTC and knowledge centres. It also gives key numbers for ongoing portfolios by region.

At the time of publication of AR2017 (June 2018), total IFAD loan and grants approved since 1978 were worth US$19.8 billion and the programmes and projects we support were estimated to have reached about 474 million people.

Here are the key portfolio management highlight numbers by region:

Asia and the Pacific
East and Southern Africa
Latin America and the Caribbean
Near East, North Africa and Europe
West and Central Africa

Not just numbers
The Annual Report is more than just numbers. It also tells the stories of some of the rural women and men IFAD invests in.

In Afghanistan, Mrs Makai has increased the income she makes from her cows by taking part in the Community Livestock and Agriculture Project and she’s also become the leader of a self-help group.

In Kenya, young farmer Joan Kirui is now debt-free thanks to her participation in the IFAD and EU-funded Kenya Cereal Enhancement Programme, which gave her training and access to inputs through a pre-paid debit card.

In Sudan, Abla Mohamed Safaien was selected as leader of her village development committee. She then took leadership training and now encourages other women to increase their skills and confidence and play a role in their communities through the Western Sudan Resources Management Programme.

In Guinea, young farmer Mamadou Bah now grows potatoes on 50 hectares of land and employs eight permanent workers and more daily workers as a result of his participation in the National Programme to Support Agricultural Value Chain Actors.

I’d like to close with a big thank you to the many people who have contributed to AR2017 – I hope you will all be happy with the end result. We’re launching the Annual Report on IFAD’s social media channels and social reporters can get the launch kit here. Use hashtag #IFADar and share your favourite quotes, facts and figures with your followers.

Lastly, if you would like to use AR2017 graphics or infographics in presentations or other products, please write to gds@ifad.org