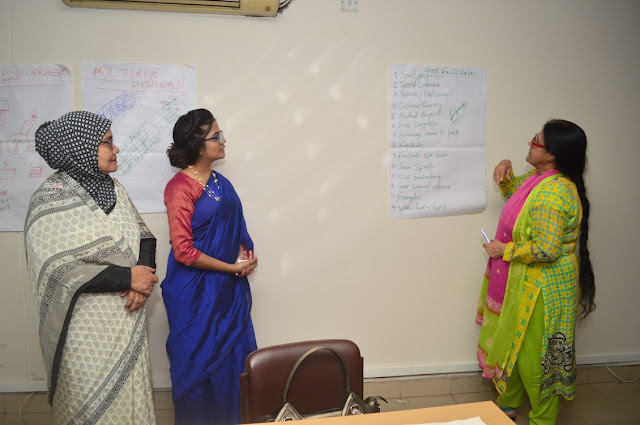 This year in Bangladesh marks a milestone for gender equality with the introduction of the Gender Action Learning System (GALS) in Labour Contracting Societies (LCS). Bangladesh’s Local Government Engineering Department (LGED) and IFAD jointly designed a pilot to empower women and their families working as wage labourers in LCS  to achieve transformative changes. This means that women in these groups will be supported to increase their incomes, develop their livelihoods and change areas of inequalities that they may face in their homes, their groups and their communities.

The Local Government Engineering Department mainly invests in infrastructure development and employs LCS – of which the majority are poor women – for the construction of roads and markets. With Bangladesh graduating into a Middle Income Country in the near future, GALS allows for more equitable distribution of welfare within the household. Experiences and lessons learned from CCRIP will be integrated the new project PROVATi³ that will fully integrate the GALS as an approach for empowerment of LCS workers. Results and impacts will closely monitored and will inform policy-making in the country.

In late April, an inception workshop on GALS was given to LGED in Dhaka. The workshop was co-organized with the CCRIP and facilitated by a member of IFAD’s gender and social inclusion team. The workshop was attended by the project staff at central and district level, but also the Gender and Development Forum of the LGED, and two IFAD staff members.

The GALS workshop kicked-off with a dynamic introduction session that broke the ice and allowed participants to get to know each other. It provided an opportunity to discuss gender issues faced by the project during implementation such as heavy workload of LCS workers, high level of illiteracy, lack of business planning and lacking social capital to support a way out of poverty. The GALS approach and principles, together with the phases and tools, were introduced to the participants and linked to the challenges faced by the project. Case-studies and video material delivered a powerful message on the impact created by GALS in other countries. By the end of the day, all participants seemed to have mastered the basic principles of GALS. More importantly, after the workshop all participants recognized the importance of GALS and were enthusiastic about including it in their project interventions.

The next step will be start implementation of the pilot activities in August through a GALS Change Catalyst Workshop in five market areas of the CCRIP. The change catalyst phase aims to provide tools for 125 women workers in LCS to increase their incomes, address gender inequalities in their homes and empower others around them (family members, neighbours, co-workers). The project will hire a team of consultants to conduct the pilot activities and it will offer an opportunity to exchange experiences with Africa.

Congratulations to the project teams for pioneering GALS in Bangladesh!