Reflections on Seeds and Chips 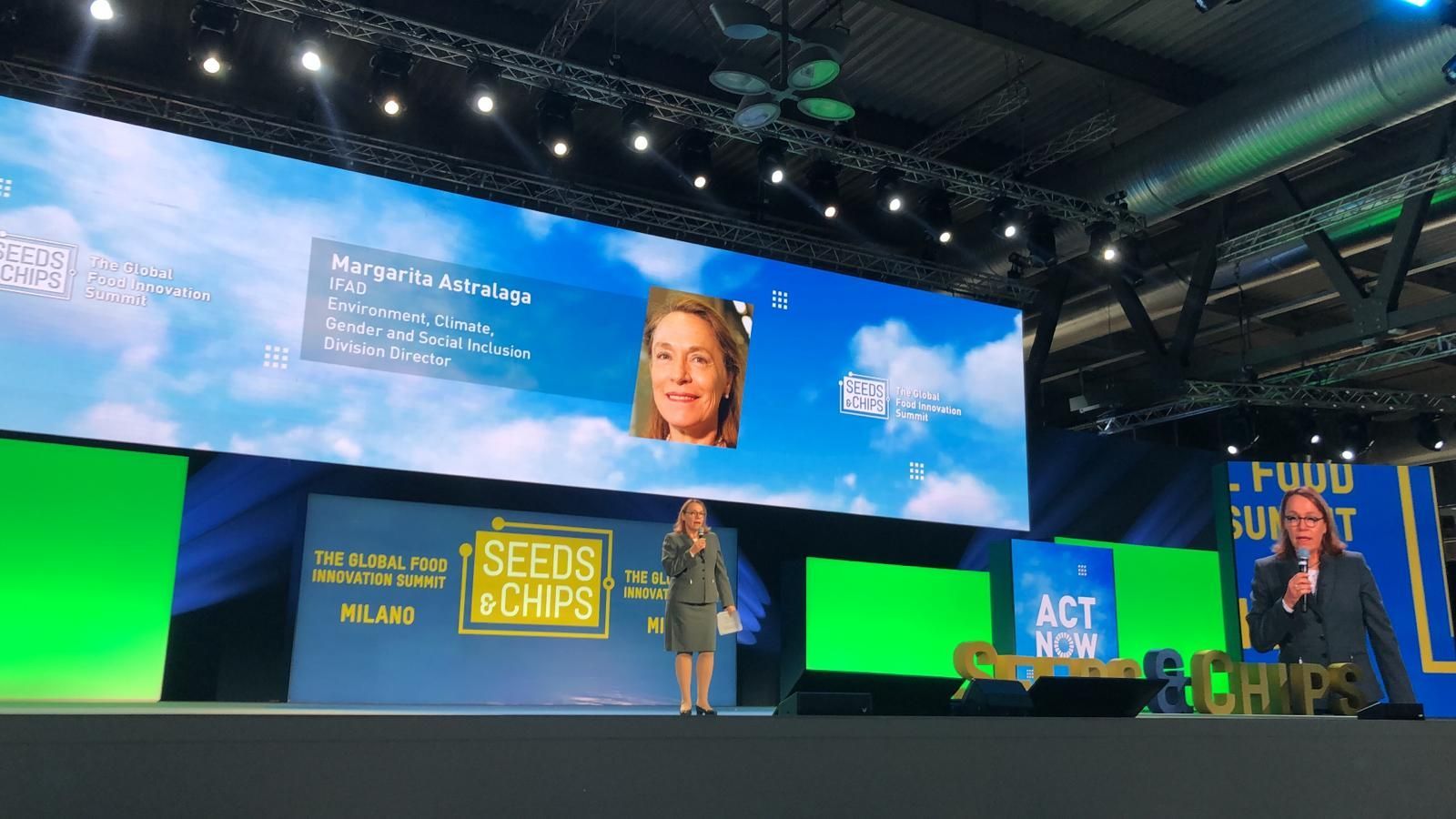 IFAD enjoyed a prominent presence at the fifth edition of the Seeds and Chips Global Summit. The four day extravaganza saw an array of world renowned guests, investors, policy makers and hundreds of expert speakers descend on the Fiera Milano in the Lombardy region of Italy to discuss the plethora of issues surrounding food production, means of innovation in the food industry, and how these issues influence and are influenced by the world's most pressing challenges. Throughout the Summit, numerous conferences and meetings took place, encompassing anything and everything related to innovation in food systems, ranging from food waste and the circular economy to cutting edge technology like precision agriculture and the ever-evolving field of e-commerce. While not attending panels and conferences, attendees could make their way to the exhibition hall, taking in projects and exhibits from a myriad of companies, start-ups, accelerators and incubators.

IFAD was well represented in the form of Margarita Astralaga, who was right in the thick of proceedings from the onset, participating in two very dynamic and diverse panel discussions as well as taking part in the launch session of the SDG 2 exhibit of the Goals on Tour campaign. Specifically, Astralaga featured prominently in the "It's Time For Africa" stage, where she remained steadfast in her overarching message throughout the week, i.e. that in order for progress in the truest sense of the word to be achieved, the circumstances of the most exposed and vulnerable groups in society, i.e. women, youth and indigenous peoples, must be mainstreamed in all projects and interventions.

During the first panel which was entitled Bridging the gap between surplus and scarcity: Opportunities of Food Innovation, Astralaga emphasized the fact that the once positive trends in reducing hunger in Africa have reversed.

"The prevalence of undernourishment in Africa is rising. In 2017, an estimated 20.4 per cent of the population was undernourished, up from 18.3 per cent in 2014", said Astralaga.

While discussing pathways to arresting these deeply troubling trends, Astralaga presented a menu of options, ranging from the proliferation of postharvest technologies to empowering women. The wider discussion underlined the fact that reducing the prevalence of hunger in Africa, and indeed globally, requires approaches that transcend sectors.

Ending with a message of hope, Astralaga said "We know what to do, but we are not doing it properly. We have to beat hunger but we also have to feed our children with the proper food."

In the second panel, entitled Africa and the Food Revolution, Astralaga set the scene early by highlighting the dire straits that the continent finds itself in regarding food security.

"With over 256 million of the world's undernourished people living in Africa, the need for an African Food Revolution has never been greater."

Astralaga emphasized the need to include issues such as gender equality, the rights of indigenous peoples and youth empowerment if this situation is to be turned around. In her intervention, Astralaga chose to focus primarily on issues relating to youth and gender. Of particular interest to the audience was the array of ways in which IFAD ensures that young people and women and girls are not left behind in the wider development agenda, including the SECAP, household methodologies and strong commitments the Fund made as part of its eleventh replenishment.

Finally, IFAD's participation at Seeds and Chips was rounded off at the opening of the launch session of the SDG 2 exhibit of the Goals on Tour campaign. The campaign was designed to create public awareness and support for the United Nations Sustainable Development Goals (SDGs). Sixteen shipping containers filled with content related to the SDGs will function as a traveling exhibition on a sustainable journey around the world. Stopping in different cities, public spaces and major events, this project will engage the public and promote sustainable solutions to the global challenges we face. Speaking at the launch of the SDG 2 exhibit alongside representatives from WFP and FAO, Astralaga brought an air of positivity to proceedings, outlining what the international community can do to address some of the grand challenges we face moving forward. “Sustainable development is the pathway to the future we want for all", she concluded.