Posted by Christian Assogba on June 03, 2020
By Julia Guimaraes
Mardonova Mehrubon, from the Sayyora village in Tajikistan, is one of the beneficiaries of IFAD’s Livestock and Pasture Development Project (LDPD-II). LDPD-II aims at reducing poverty in the Khatlon region as well as enhancing the local population’s nutrition levels through livestock productivity. Mardonova is a mother of three and one of the recipients of LDPD’s milk processing equipment. The distribution of this income generation machine is part of the second phase of LDPD, entirely dedicated to the promotion of women’s economic independence. Women Income Generation Groups (WIGG) have also been established as part of the effort. 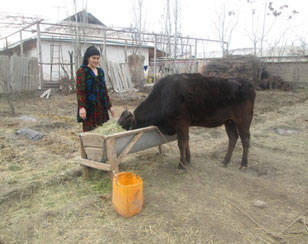 Passionate about raising livestock, Mardonova was provided with a purebred dairy cow and is steadily expanding her business. Alongside other WIGG members, she learned how to properly manage livestock and income from livestock products by participating in trainings conducted by project staff. Local communities also have access to regular technical support and veterinary services for the livestock provided by staff. Mardonova currently sells milk products at her village’s milk collection point and plans to start selling calves herself in the future to increase income and quality of life. 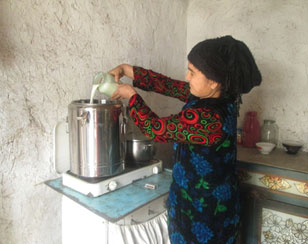 “One of the main problems that is being solved through this activity in my family is shortage of income to provide my children with the schoolbooks. Also, I have been actively involved in all community-level activities since WIGG was established and have found my position in the community. I did not participate in any activities before the establishing of Pastor User Unions and WIGG, and after the support provided by IFAD, I have realized that our participation in community activities is not only in the best interests of the village but also plays a good role to make appropriate decision for the entire village and for the rural women” – says Mardonova. 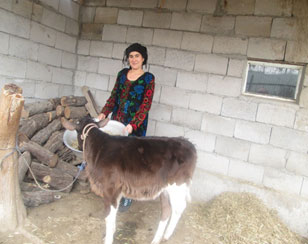 Tajikistan’s rural population accounts for 74% of the entire country, and although women outnumber their male counterparts in the farming sector, the country is the lowest ranked in Central Asia in terms of gender equality. Since 1991, their education, wages, and formal employment levels dropped significantly. In farming, they are appointed to the jobs that pay the least and that depend on seasonal demand. Through phase two of IFAD-funded Livestock and Pasture Development Project, hopes are that women will gain increased economic independence, a better and stable income, and practical knowledge on livestock productivity and management. In the long run, the project results will hopefully be multiplied within local communities and passed onto future generations for a more secure and independent life for Tajik women.
#gender #ifadgender #nutrition gender gender issues gender&Nutrition nutrition